Our customer was a manufacturing engineering at one of the world’s leading producers of personal watercraft, located in the Southeast United States. He was challenged with replacing two aging robots and outdated spray and control equipment on a clear coat paint line as well as the entire controls package of the base coat line, all over a single shutdown period. This project required all existing equipment to be unhooked, disassembled, and removed before the installation of the new equipment. To add to the challenge, this equipment was enclosed in a spray booth on a second story mezzanine that was surrounded by existing plant machinery. 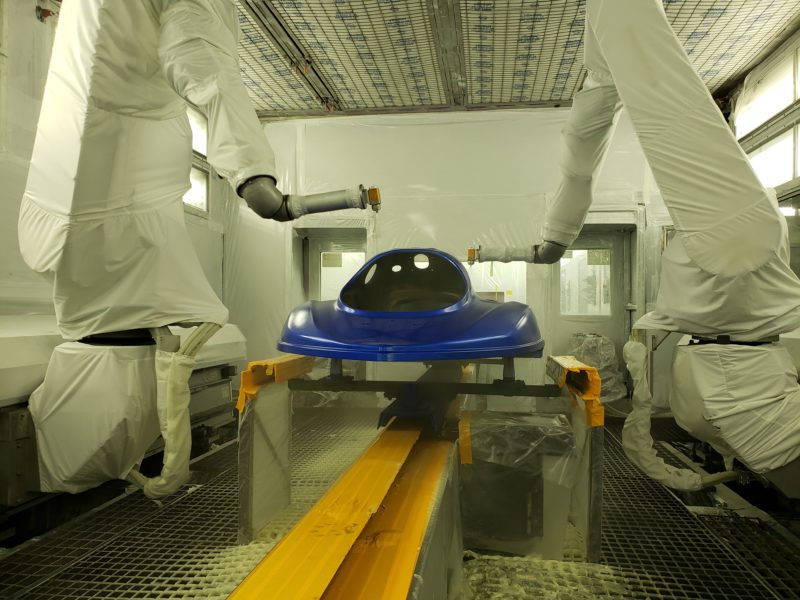 The customer was introducing a new model launch at the end of this shutdown period, and the goal of replacing this older equipment was to reduce the downtime of maintenance and reduce the amount of paint waste they saw with the older equipment.  Upgrading the spray and software packages would give them increased transfer efficiency and tighter control of the overall spray process.

To make things more challenging, the decision to move forward with this upgrade was made later than normal for a project of this magnitude.  This led to a condensed timeline and multiple component delivery hurdles to overcome.  Failure to complete the project on time, however, would have meant delaying the entire model launch.

Pioneer Industrial became a FANUC paint systems integrator back in 2007. Our relationship with FANUC led us to not only install our own robot cells but also install over 100 robots directly for FANUC and other companies. Most of these installs have taken place over shutdowns like the one described above. This install experience, combined with our knowledge of paint systems integration, put us in a unique position to help this company solve the challenges of their project. We built on a past relationship with the customer, and since the installation portion was a vital component of the project, FANUC supported us as the turnkey supplier.

Upon receipt of the purchase order, Pioneer started its defined process for Multi-Robot Installation Projects. This project involved detailed engineering kickoffs where we worked closely with the customer and FANUC gathering detailed information, including plant layout drawings, electrical and fluid schematics, structural drawings, etc. We provided the customer with a detailed schedule and CAD drawings for approval based on all the known variables. As the project components came together on the floor, consistent updates were sent to the customer. Our experience managing projects with multiple components and multi-robots was crucial for bringing everything together as required in the available short timeframe.

After all the components were in and checked out on our floor, the equipment was disassembled, shipped, and Pioneer’s assembly crew went on-site to install and commission the equipment. Due to compressed timing, the base coat controls upgrade was installed while the mechanical rigging was replacing the clear coat line rail robots. Upon completion of both line installations and commissioning, the paint line was handed off to the customer to load, test, and touch-up the robot programs converted by Pioneer from the old robots using FANUC’s PaintPro offline programming software.

The customer was given support documents and was provided with four weeks of combined on-site and remote support once the startup was completed. This included equipment drawings, a manual, the latest copies of programs, and a spare parts list. A trip report was also completed and submitted to the customer at the end of the project.

Overall, the project was very successful.  The existing equipment was uninstalled and the new equipment, including two P250 Fanuc robots on 4-meter rails with new paint mixing and delivery systems, control hardware and software packages for both base coat and clear coat, all installed and commissioned on schedule.  The customer was able to start their new product launch on time and have since seen improved quality and less downtime.

Contact us today to talk to an automation expert about your unique challenges. We take the time to listen and will help you to assess your options. From there, we’ll set up a free consultation to visit your operation and see your challenges first hand. There is never an obligation. We are just passionate about helping manufacturers solve their problems with robotics and automation.